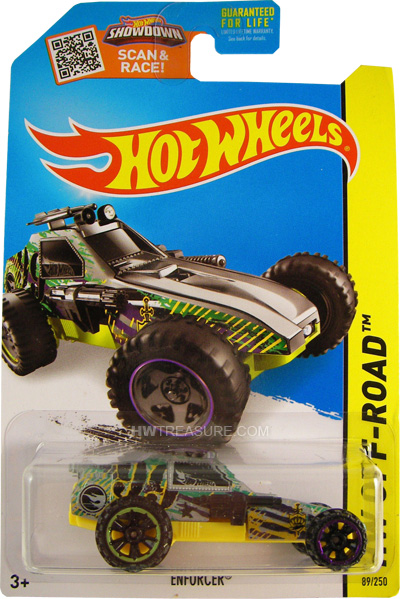 Casting #: 89/250
89/250 is part of the HW Off-Road series and the 2015 Treasure Hunt set. The gray car boasts sides with black, yellow & green graphics; a black & yellow “99”, a black low production symbol, and a white Hot Wheels logo. It has black windows, black guns on the sides, Off-Road 5-spoke wheels, and a yellow plastic Malaysia base. This vehicle can be found in mix “J” of 2015 Hot Wheels mainline cases. The fighting vehicle made its 1982 debut as the Megadestroyer. It was in the Megaforce series which was a collection of vehicles based upon the Megaforce action movie. It was later renamed Super Cannon and is currently known as the Enforcer.
Picture and description thanx to hwtreasure.com

Turn on search for release year